This addresses the big baffling question: why a virus that causes no disruption in many people, and only slight disruption in most people, causes death in others. 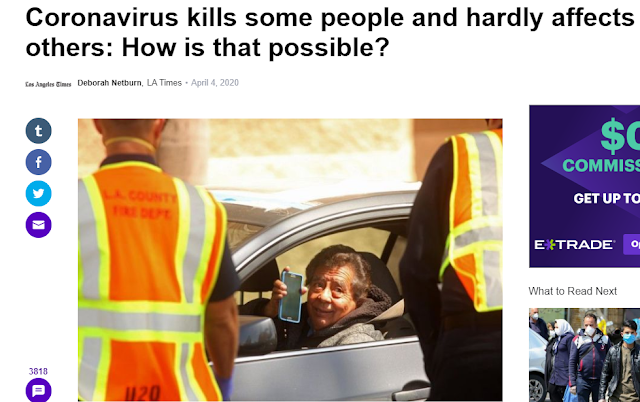 They admit that, visibly, the Corona virus causes nothing more than a positive test result in some people. And they have provided no evidence of any changes in their bodies. They wax on about a silent struggle going on, but it's all supposition.

And keep in mind that we're not talking about just a few "asymptomatic carriers." We're talking about a ton of them because at this point, people are distancing, even from the well, and those with symptoms aren't even going out.  Of the newly diagnosed, how many of them know who infected them? And put aside medical workers. So, excluding medical workers, what new infectees report being around, in close proximity to a suspiciously sick person or one known to have Corona virus? It has to be very few. So, we are at the point where this whole pandemic is being fueled by "asymptomatic carriers." And for it to continue, the number of asymptomatic carriers will have to keep rising.

The article admits to 20% of infectees being asymptomatic carriers, but that is surely low. In Iceland, they are finding that half their infectees are asymptomatic. And in the small Italian town of Vo Eugenio, they tested all 3300 people in the town and found that the majority of infectees were asymptomatic.

But, they claim to know that "the virus is proliferating in the bodies of the 'silent spreaders'" even though they don't get sick. But, that is purely an assumption. They don't provide any evidence for it. They just assume it.

There has definitely been a shift in thinking. Early on, Dr. Fauci said that silent spreaders have never been the prime movers of any epidemic or pandemic. But now, they have to go to that space because everyone is aware; they are practicing social distancing; even from the asymptomatic. The symptomatic- they're not even going out. They're staying home. I ask you, the reader, when, of late, have you seen someone out in public who was hacking, coughing and looking febrile? So yes, we are at the point now where they have to attribute the spread of the epidemic to silent spreaders: they have no choice.

Dr. Edward Jones-Lopez said that 50% of those infected don't know that they have it; and presumably don't get sick. And that of the 50% who do show symptoms, 30% have mild to moderate symptoms, from which they recover spontaneously, while 20% get very sick and could die.

Now, I don't know where he got those figures from. He may have just been bloviating. But a span of effects that goes from nothing to death is the biggest span there is.  So, what is causing death among the few?

They are saying it is a destructive immunological response to the virus, that does as much or more damage as the virus; that the virus causes the immune system to go haywire. It is an immunological storm, in which the body destroys its own tissues and organs.

But note first that inflammation is inherently defensive and restorative. It's not an attack on oneself. It is a useful and necessary marshaling of resources to rectify something that is wrong. In January I had hernia surgery, and afterwards, I had some inflammation for a while. I was advised to put ice on it, but I didn't. I had no desire to inhibit the inflammation. I was not afraid of it. I knew it was healing. So, I didn't use ice, and I didn't take anti-inflammatory drugs, as advised. The result was that I healed VERY quickly. I was back to doing everything in less than a month.  It was amazing.

I get it that there are people with abnormalities whose immune systems malfunction, for whom inflammation can be destructive. And I feel very sorry for those people. But, I am not one of them, and I have a lot of trouble applying it to random people across a population.

It's all just supposition. It's pure speculation. What do we really know? And by we, I mean you and I. We know that they have this very shaky pcr test, that they consider infallible, even though it is designating a great many people as infected who appear not to be. And just because authority won't consider false positives doesn't mean you and I shouldn't.

And if you think it's a matter of privacy, this is affecting every person on this planet. This is unprecedented  because even during the 1918 Spanish flu pandemic, the whole world didn't shut down. I hope that you are as rattled by the highly manipulative reporting that is going on as I am.