How to get a toned, flat abdomen

First, I want to show you that I know what I’m talking about. I’ll be 71 next month. 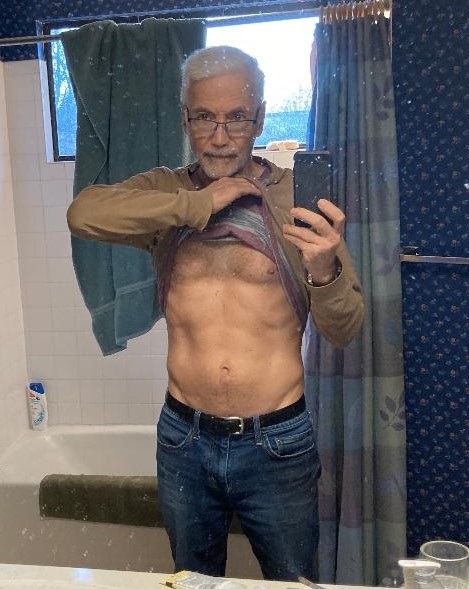 Now that I’ve shown you that, the next thing I want you to know is that I do no abdominal exercises. None. No sit-ups. No crunches. Nothing.

I do exercise. I hike. I bike. I swim.  I do pull-ups. And I do a little bit of resistance training, but nothing strenuous. I don’t go to the gym. Just light stuff that I can do at home. At my age, I don’t want to hurt myself lifting heavy weights. What for?

And although I’m OK with the way I am, I could be leaner. I’ve got some fat there. If I pinch around, I have no trouble finding it. But, I assure you that if I had any more fat there, I would be concerned about it and determined to get rid of it.

So, what do I do? I eat a plant-based diet: fruits, vegetables, salad greens, raw nuts and seeds, and various kinds of cooked beans. I eat black beans, pintos, garbanzos, lentils. I go for vegetable soup with red kidney beans. I also eat some whole grains, particularly oatmeal, and less often brown rice or quinoa. But, I’m not as big on grains as I am on the other foods.

And I do use some extra virgin olive oil, sparingly. I know that many plant-based doctors are completely against it, but I think they’re wrong, and I think the reasons they give are wrong. For instance, Dr. Neal Barnard says the reason EVOO is bad is because besides having that great monounsaturated fat, it also contains some saturated fat. Big deal. That’s not a problem. It’s also true of nuts and seeds. Demonizing saturated fat is ridiculous. Your body needs it. It can make it, but it makes it because it needs it.

Many protective effects have been attributed to EVOO, but I’m not going to list them because I don’t want to seem over-zealous about it. But, I will point out that there are scientific conferences held every year where doctors and scientists meet to hear and exchange about the latest research on the health benefits of extra virgin olive oil. This is one from 2018 in Spain.

However, I do agree that the whole foods, such as nuts ands seeds, are nutritionally superior to any kind of oil, including olive oil. If I were stranded on a desert island, and there was nothing to eat except bottles of EVOO that drifted ashore, I wouldn’t consume it. I would not put my body on a diet of just olive oil. That would be far more stressful than fasting. Fasting my body can adapt to, but a diet of olive oil alone my body cannot adapt to. So, if there were nothing to eat but olive oil, I wouldn’t eat. I’d fast. But, if instead of that, there was a grove of avocado trees, so I had nothing to eat but avocadoes, I’d eat them. I know I couldn’t live on them forever, but I could live on them for a while, and I’m sure they would sustain me well. But, the irony is that I rarely buy avocadoes any more, and the reason is that the quality has deteriorated so much. Avocado used to be a delicacy. You could put a scoop of avocado in your mouth and savor its unique and complex flavor as it evolved and transitioned in your mouth. But, today’s avocadoes are bland and one-dimensional- a shadow of their former selves. So, I don’t buy them like I used to because they’re expensive and usually disappointing. Maybe it’s different for people who live in areas where avocadoes grow, where they have been cultivated properly.

And I’m strict about limiting my food consumption to mealtimes. I don’t snack. Many days I just eat two meals, lunch and dinner. And the days that I do eat in the morning, it is always a very light meal, such as, just watermelon. I don’t eat solid food 3x a day. I don’t need to. It would be too much.

But, I like getting out to walk, bike, and swim. It makes me feel good physically and mentally. And on the days that the weather is glorious, then I have to do it. Of course, of the three, walking and swimming are completely totally natural. Functionally and posturally, what could possibly be better and more natural than walking? Nothing. Swimming is that way too, particularly when you swim the crawl. You don’t hear that term used often because it’s become known as the freestyle. But, the crawl is a better term for it because it’s the equivalent of crawling through the water, and it comes as natural to a person as crawling does to a baby. Biking isn’t as good, biomechanically, because your back is bent and your head is extended back, and you tend to stiffen your neck while you’re riding, which isn’t good. The recumbent bikes are biomechanically better, but I ride a standard one. But, I do my best to stay elongated and not stiffen up too much. I’m aware of the problem.

So, between the food and the exercise, I’m doing pretty good keeping fat off my abdomen. I could be doing better, but relatively speaking, I’m doing well, and that’s without doing any abdominal exercises. It should not be necessary to do them, and there is nothing natural about doing them. Do wild animals do them? No. Of course not. And they don’t get flabby bellies.